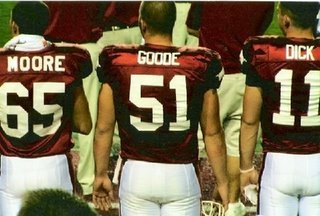 Arkansas Razorback players Clarke Moore, Brett Goode and Casey Dick love hanging out on the sidelines. This was actually on TV. The commentators paused ... and didn't say a word.

Some hot teen football fans, however, have a few words; well, one in particular. 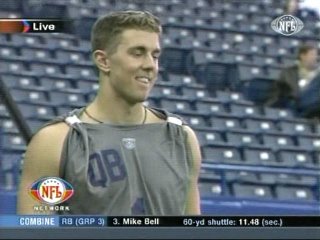 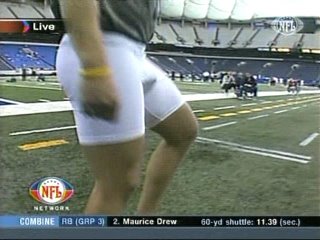 I hate football, but I love to ogle football players.

Here's QB Brett Baseñez of Northwestern. 6ft 2, 200 lbs, showing off in compression shorts and sleeves taped up to show off the biceps -- he was in full peacock mode that day.

Check out the short clip (Rapidshare 35mg mov) of him preening and showing off more than a West Hollywood hooker would on a street. Just so you know what pro scouts are really looking for - a hot stud to thoroughly inspect.
Posted by Tom Bacchus at 4:33 PM No comments:

(London) The extreme right wing British National Party which publicly condemns homosexuality was left with egg on its face Wednesday when it was learned one of its leaders produced and directed a film featuring young men cavorting in the nude and fondling one another.

In Barnbrook's election campaign material the BNP called for a local vote to let parents decide if they want to "prohibit the teaching of homosexuality as an alternative lifestyle choice".

Previous BNP pronouncements included calls to criminalize the "revolting practices" of homosexuality and calls AIDS the "revenge" of nature against "the nauseating proliferation of homosexuality".

London's Evening Standard which uncovered the old movie reports that it shows men undressing, full frontal nudity and the men fondling each other. In one scene, the paper reports, one man performing a sex act on another.

At the bottom of the screen there is homoerotic poetry. The film's credits list Barnbrook as producer and director but he denies writing the poetry, which the UK Telegraph says, includes:

"It bares you like a foreskin's folds" and "Open-mouthed, I shall dream of altar boys."

Here's yet another hot dude jacking off on his cam, not knowing he's soon to be-cum globally appreciated. Click on the "play" button. There's so much speculation over who he is. Note that he's sending it or performing for some other guy, but man, that decor is a bit too butch for me.

Anyway, an online pal uploaded it HERE, so you can enjoy it big screen and offline. I swear, this guy is the most popular amatuer jack-off artiste ever! This clip is simply everywhere! Amusingly, a shorter version which includes some of the hard-on shots is still on the R-rated YouTube. Imagine getting 60,000 people watching you jack it! Hawt.