Well, it took months, and I've been contemplating this wacky idea for years. A recent re-viewing of a certain classic musical about three sailors on shore leave inspired me to finally begin, and now, complete, Doin' the Town, my latest gayrotic tale! The 20,000-word 70-page Kindle novella will be out June 1, 2021. But you can pre-order it now.

Here's the adult version of the online description:

Shy Frankie gets lured into a ride with Ajaz, a handsome and persistent cabbie who blows him in the cab.

Gabe, however, becomes instantly obsessed with Gerardo, a handsome Latin muscle model, in a series of flyers he finds. He follows his mystery man to a gym for a sweaty workout, but Gerardo eludes him. Their next encounter takes Gabe to the famed Gaiety strip club, where Gabe ends up performing naked onstage, his cock hard for an appreciative audience! 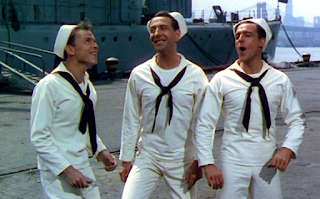 This fun and erotically charged gay parody (of a certain classic musical and film) will satisfy your lustful craving for a triple serving of seafood.

Pre-order now for the June 1 release!

Posted by Tom Bacchus at 2:10 PM No comments: