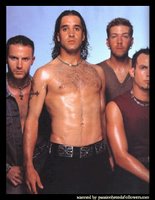 Former Creed singer Scott Stapp made a trailer sex tape the night before his recent drunk driving arrest. Stapp, who flogged the Christian crossover angle when with Creed, has certainly shown his more Bacchanalian side in a just-unleashed sex tape. What will all those religious teens whose conservabot parents let them go to Creed rock concerts think? And how fast will they look up the tape online? I didn't know getting sucked off by groupies was part of the "Christian" life, but hey, who am I to criticize?

So far, only a short mini-clip has been posted online. It's not X-rated, unfortunatey - yet.

Also unfortunately, the tape is a fourway with the somewhat repulsive Kid Rock 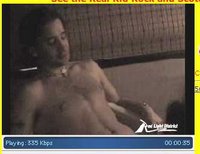 and a few big-haired groupies.

So, no hardcore action yet, but we can certainly expect more to be revealed, like the Paris Hilton, Colin Farrell, Fred Durst, Tom Sizemore, Pam & Tommy, Survivor cast newlyweds, Simon Rex, and oh so many other celebrity sex tapes. Goodness. It's getting to be that one can't keep track of all the famous fucking going on. Brilliant PR move or sad state of celebritydom? Who can say.

Sure, Creed was pretentious. But sexy male baritones in rock are my faves, from Stone Temple Pilots to Nick Name and American Idol 5 studmuffin Chris Daughtry and his band Absent Element. Manly music is the best for romancing and hardcore sex. I just hope Scotty gives us a nice faithful money shot. Eat, for this is my body! Here's a silly fake (apologies to Gilbert & George) of which position I'd like to see Scott take. With arms wide open? How open butt cheeks, too?