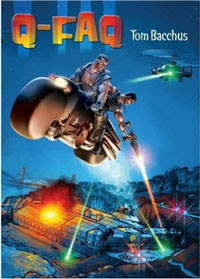 Check out my Q & A with Bay Windows. an excerpt:

Q: The sexuality definitely comes through! It’s strange how few sci-fi authors take on sex.
A: So much of the sci-fi I read growing up had little or no sexuality, which is absurd. The future is entirely based on how we breed and mate. So, I did a lot of "inferring" or inserting some kind of queerness where I could, particularly in the "hot guy in a loincloth on a planet of lizards" genre, until the genre of LGBT sci-fi/fantasy took off in the 80s and 90s. When Chrome came out, I was enthused. That and Mad Max probably influenced creating Aces and his "special parts."

Reviews of Q-FAQ are starting to be published. Here are a few excerpts:

Tom Bacchus's Q-Faq (Haworth Positronic Press; 203 pages, $12.95) is a science fiction, sexual-liberationist novel about a future society in which a U.S. government run by the Puritan Party is pushing an anti-gay, anti-sex agenda across the divided states of America. Into this dystopic mess emerge mercenary Aces Bannon and Afaik, a queer Middle Eastern rebel. They join forces and work with a growing underground of political and sexual rebels. This is standard science fiction with a queer slant -- a sexed-up Ursula Le Guin crossing with all those 1970s erotic comics by Etienne in which men with large dicks trapped in rocket ships or on distant planets fuck their way into cosmic delight.

Bacchus shows total assuredness as a writer even while taking chances with his readers. Q-Faq is stylistically edgy as well. Blending more traditional narratives with a collage of pamphlets, communiques, posters, and various other "informational" artifacts, Bacchus constructs a quick-moving story that's something of a cross between 1984 and a collection of Italo Calvino stories... Q-Faq is ... one of the more intriguing and satisfyingly entertaining books of gay fiction to come out in a while.

The novel itself is a journal-like account, from Afaik’s point of view, of the bizarre, colorful creatures they encounter, the ludicrous situations they find themselves in, as well as blog and news excerpts from ongoing current events, which attempt to help both the reader and the protagonist determine where the duo are headed and why. The most important clue is an advertisement from a gay.com-like website, appearing over and over, announcing its sponsorship of the grand reopening of a once-famous bathhouse, an event which is expected to attract masses of sexual deviants. Is this gathering of the masses just another gala circuit party-type event, and might it have something to do with why Aces is compelled to race across the country?

The ridiculousness of the circumstances is undeniably hilarious on occasion. Still, the end result is a bit of jumbled mess; and only a creator of science fiction and fantasy could get away with it.

And, from Bay Windows:

Good science fiction, even if it’s set in the future, is always about the present. This rowdy and raunchy account of queer terrorists in a repressive near future is laced with contemporary concerns and political satire. The U.S. of A. is recovering from holy wars and the government takeover by neo-Puritans, who are clamping down on dissidents of all kinds. Being gay is not yet a crime - in fact, the gay demographic is still a plum target for marketers - but queer anarchists see the writing on the wall and are building sanctuaries and preparing for war.
The main character is a small-time hacker who gets swept up in the plots when he falls in lust with a cyborg who turns out to be a key figure in an anti-government conspiracy. After nearly getting killed in (what’s left of) New York City, the duo goes on the lam, taking the reader on a nightmarish road trip across America. The book’s cyberpunk style - jittery, spare, full of jump cuts and little diversions - is like John Brunner’s version of The Handmaid’s Tale, with plenty of sex thrown in for good measure. Here gay sex is an act of defiance, and the characters are defiant enough to make this dystopia a dicktopia. The graphic sex scenes may be too much for the average sci-fi reader, but queers of all kinds should enjoy this wicked thriller.